The War with Solids

So our pediatrician told us we could start Quinny on rice cereal around 5 months. We were obviously excited and we thought Quinn was too because she was just in awe of us every time we ate, drooling like a crazy person and glaring us down. So at 5 months we gave her her first taste of rice cereal. You would have thought we were feeding her mud. Not impressed. So we just kept at it every night and didn't force the issue. Well two weeks went by and still nothing. We even tried some oatmeal and she just kept spitting it out in disgust. I emailed the pediatrician and told her our struggles and she said, go ahead with the veggies and see how she does. I honestly thought she would love the veggies and she was just being a little stinker about the rice and oatmeal, because honestly that stuff cannot taste good. So me being all excited, and ready to use my Beaba baby food maker got some peas and prepared for her first try at veggies. This is the response we got. 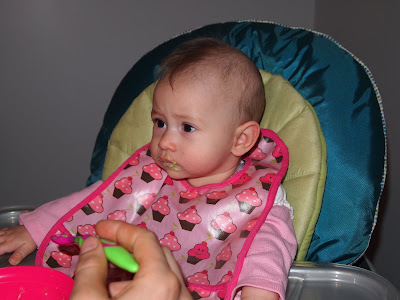 Fail. The kid was as impressed with the peas as she was with the rice cereal. At this point I was thinking that I would be breastfeeding this kid until she was 5. We tried green beans, which she did a little better with, but not by much. So we were now thinking, she probably just was not ready and we should give it up for a few weeks. Then one day Anth was eating applesauce (I know, I have two babies), while we were feeding Quinny and I told him to just give her a little bit to see if she liked it. The doctor had recommended giving greens first, then orange veggies, and finally fruits, so we were a little hesitant, but at this point we said what the heck. What do you know, guess who gobbled up that applesauce like she was a starved baby. Yup. What a little stinker! So we decided to just try carrots and see how she did and forget the whole order of food rule for now. Well now she gets upset because we don't feed her fast enough! She loves applesauce and she loves carrots! Hopefully all the other foods will go down with the same excitement!
Here are a few pictures of our little QT: 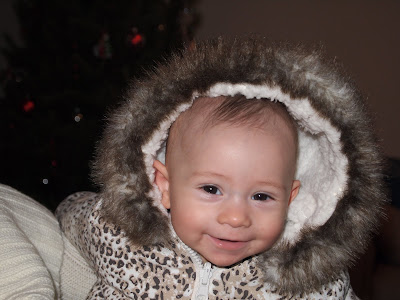 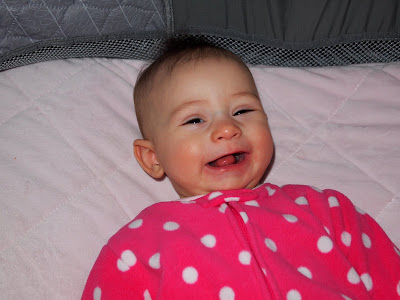 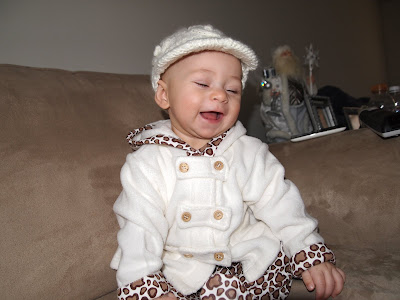 I will be spending the remainder of this week getting ready for her first Christmas! I am so excited, and I cannot believe how fast the time is flying by. I remember last year thinking, oh my goodness next year will be so fun with our little girl at Christmas! And now it's here!