15 Months (and 1 Day) of Breastfeeding

I thought I would share my whole breastfeeding journey, being that this is first and foremost a mommy blog and the fact that my life literally revolved around my boobs for 15 months. Even before I was pregnant, I knew that I wanted to at least attempt to breastfeed. I told myself that if it worked out, then great, if not it was no big deal. The only class we took when I was pregnant was a breastfeeding class at our hospital. I think I left there feeling more frightened than anything else, although it was extremely helpful to a baby idiot, as I was/still am.

I hadn't read any books on pregnancy and to be honest my only sources if info were my friend Colleen, who was due 3 weeks before me and the weekly emails I got from Babycenter.com. Let's also not forget The Bump. So when the time came to actually have the baby, I remember thinking, how hard could this be, put the baby on your boob and bam!

I was sort of right. I was fortunate enough to have a baby that latched on like a suction cup from day 1. I remember waking up and being wheeled into the recovery room, holding my brand new baby girl. It was just Anth, me and the nurses at that point and I remember saying, "Oh my god! Should I feed her?" I was clueless. So the nurse helped me out and positioned the baby and bam. She was going to town. I think it only lasted a couple of minutes before she fell asleep again, but I remember thinking, "success!"

The one thing the class had failed to mention was that you should probably just walk around topless for the first couple weeks of your baby's life because it will want to eat ALL THE TIME. Now you're probably thinking, what is wrong with you? I honestly thought babies ate every 3 hours. I was cursed blessed with a hungry little nugget who would settle for no more than 2 hours if I was lucky.

At the hospital it was nice to have a lactation consultant. My advice to anyone who wants to breastfeed is that if your hospital has them, use them. They are wonderful and they can seriously help you through the first couple of nights. It was painful. I put on that Lansinoh cream by the bottle. I even remember blood at one point and my husband looking at me like I was a little freakish. Apparently it's normal but whatever, still gross. I also remember one night in the hospital where she would just not stop crying. I would feed, rock, feed, rock some more. (Keep in mind I had a c-section so I couldn't really get up yet.) My husband was oh so helpful and apparently lifeless on the couch next to the baby. To this day he says "I swear I never heard her cry!" (cue a punch to the gonads every time he says this) The night nurse came in and said "You know your baby is crying because she's hungry." No shit, Sherlock I had no idea. She seemed kind of pissed about it too. She tried to get me to give her a bottle of formula and I remember thinking no! I can do this! I mentioned this little incident to the lactation consultant and her reaction was the same as mine. She told me it would be hard and I would basically be a milk machine for the next couple of months, but that if I didn't want to give my baby formula, I didn't have to. I like to think it was that night nurse that brought out my insane stubbornness and wanting to prove her wrong. I like to think this is an amazing characteristic to my personality, my husband however thinks this is a huge flaw.

After a couple of days, I just realized that the kid wanted to eat when she wanted to eat so get over it. After that one awful night, they weren't so bad anymore.

Here is a screenshot from the Total Baby app that I used when she was itty bitty to track all of her feedings. 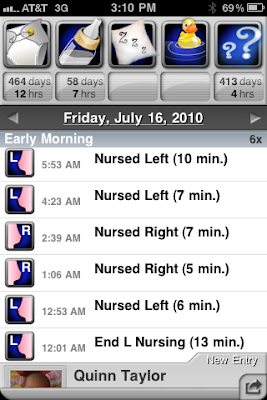 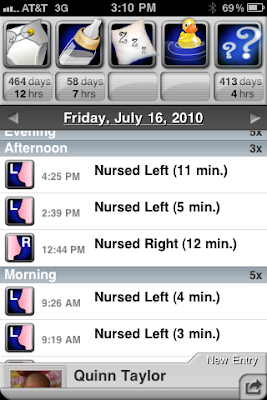 Please note that it has not been 464 days since I last changed by daughter's diaper.
That is just the last time I tracked her poopy diapers.

Every time I scroll back and look at these days it makes me wonder how I ever did it. I still don't know how I managed. The pain I had while breastfeeding lasted about two weeks. Two looooong, painful weeks. Showering was painful, getting dressed was painful. I would cry whenever I had to feed her. Anth was great through all of it. My meltdowns, my complaining. But magically, after two weeks it was a breeze. It didn't hurt anymore (probably because I had gone numb). We had our little routine down and I actually looked forward to feeding her. She would fall asleep every time and I would get to cuddle and burp her. It was love.

By the time I went back to work 12 weeks later, she was going down at 8, and get up at 8, with a 4am feeding in between. It was amazing. What was not so amazing was pumping. My plan was to have a crazy freezer stash by the time I went back to work, but being the professional procrastinator that I am, I think I might have had 2 bags. But I am fortunate enough to work very close to home so I would come home at lunch and get to feed her. I would then rush back to work to pump and pump and pump some more. Luckily I had my own room with a huge living room chair and magazines. I just hated pumping. But I did it, probably 3 times a day and in the morning and before I went to bed. A milk machine for sure.

When Quinn was getting ready to turn 12 months old, I thought, "YES! I am almost done!" My boobs wanted freedom. Anth and I take turns sleeping in on the weekends, but my days of sleeping in involved getting up, feeding the baby, waking up Anth, waiting for him to go to the bathroom, etc, before finally being able to crawl back into bed and attempt to fall back asleep.

We tried introducing whole milk after her 12 month appointment. I thought it would be magical and she would gulp it down like a champ. She hated milk in a sippy cup, so we ended up giving her whole milk in a bottle. And by we I mean Anthony and my mom, because she would not take a bottle from me. I tried Ovaltine, heating it up, anything but she wouldn't have it. She would tug at my shirt and give me sad puppy dog eyes. We finally got her drinking bottles of milk during the day and I would only feed her in the morning and evening. Then after more attempts of failed weanings, we went to every morning and every other night so Anth would put her to bed. I should also say that at night she wasn't really eating much from me, so I think it was more of a comfort thing. When Anth would put her to bed she would down a whole bottle. Stubborn like her mama.

So then came her 15 month appointment when the doctor flat out said no more bottles. I agreed, because I had wanted to cut them out at 12 months. So I took her to Babies R Us the next day, found one type of sippy cup with a straw that we hadn't tried yet and I had a sit down conversation with my daughter. I told her this was her big girl sippy cup and that she would only drink milk out of this one cup. I told her mama wanted her boobs back and that I didn't want to have to be breastfeeding her on her first day of Kindergarten.

Apprently she agreed with me, because from then on she drank milk from her sippy. Now, I understand that this may have been a total coincidence, or maybe she just really loved her new big girl sippy cup. But that next morning, I woke up and instead of sitting in her rocker and feeding her, I changed and diaper and handed her a sippy cup. She was a little confused and fussed a bit. She was surprisingly very cuddly and wanted to be held, so we spent that time hugging and cuddling while she drank her milk like a big girl. We haven't looked back since. She is a champ at drinking her milk and surprisingly, she is much more cuddly these days. And I love it. I can actually sleep in and drink as much as I want (what?).

I am happy, sad, unbelievably grateful and proud that breastfeeding lasted 15 months (and 1 day). I can honestly say, without any hesitation, that it is the hardest thing I have ever done. But it was an amazing experience and I only hope to be as fortunate with the next one. How I will manage to do it with Quinn already in our lives is something that I don't want to think about. Because she is a crazy baby who is always on the move. But I guess we will take on that challenge when we get there.

Andrea is a mom of 2 girls, wife and part time stay at home mama. She loves all things wine, chocolate and reality television. Come visit www.myattemptatmotherhood.com for more funny and honest stories about attempting to balance it all. {And usually failing.}