This has seriously taken me almost a week to get through! Everytime I try and add something or change it, I cry too much to even look at what I'm typing, so I apologize if it's all over the place and not spell checked. I never in a million years would have imagined how hard this would be. I apologize for the length of this post, but I didn't want to miss anything about our boy. And it's also filled with random pictures of our handsome guy throughout the years :)

If you remember from this post, Trigger had been declining since losing the use of his back legs. He got better for a little while, but under doctor's orders he was to remain as still as possible. 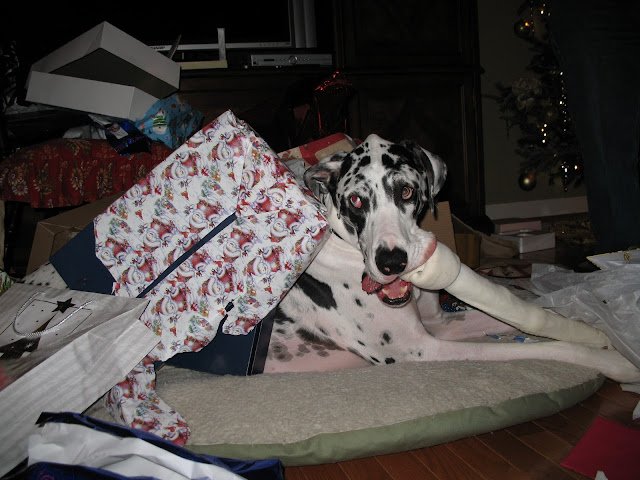 Christmas, a few years back.

Had I known that would be the last time he would walk, I would have let him run until he couldn't run anymore. We knew what he was suffering from, we knew that he probably wouldn't have as long as we had hoped (which of course, is never enough). We had made the decision that we weren't going to put a dog of his age through such major surgery + recovery + a big chance it might not even work. So we hoped for as long as could with the steroids that he was on. The medicine he was on (Prednisone) was so strong that it was literally killing him on the inside. The doctor wanted him on it for 2 weeks and he had already been on it for 6. It had worked twice before when he was having trouble walking, so we really were hoping we could get him back to walking and enjoy the time we had left with him. 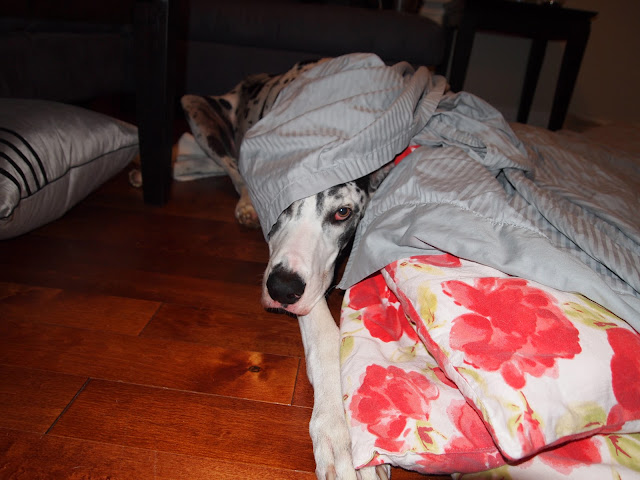 Not long after he lost use of his legs.

Unfortunately, the medicine never worked again. After a couple of weeks of my poor baby being stuck on the floor of our living room and a couple rounds of acupuncture, the doctor finally told me what I was dreading. If the Prednisone hadn't worked, it wasn't going to. I was heartbroken, but I knew that he was miserable. He had no control of his legs, bowels, anything. We did 24 hour laundry because every couple of hours we had to change the sheets, towels and blankets he was laying on. He hated being moved by any of us and looked so ashamed whenever we would have to clean him up. He developed a rash that looked like it was infected in his belly. He was done. 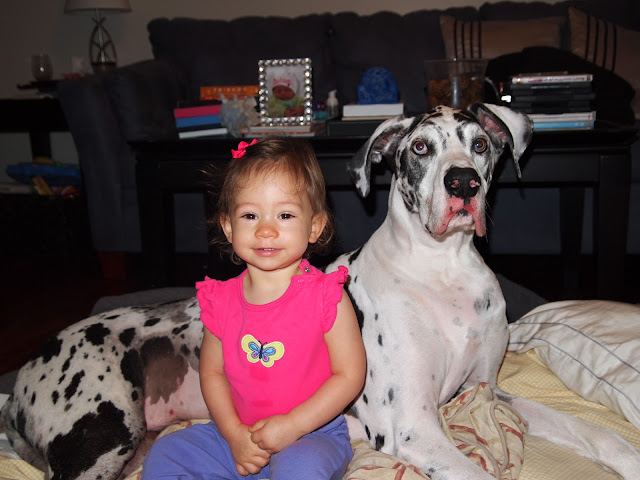 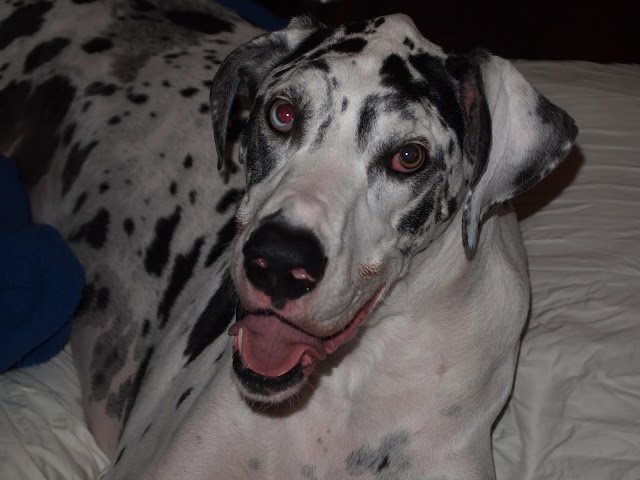 As handsome as ever.

We scheduled the appointment  for Friday, September 30th. Anth and I both took off of work to spend a perfect last day with our boy. I took the baby to my mom's so that we could give him all of our attention. He had bread and pizza for lunch and everything else he wanted. We took a nap together, watched television and cuddled all day long. His appointment was at 4:00 so around 3:00 we decided to get him outside because it was seriously such a gorgeous day out. After a lot of trial and error, we figured out the easiest way to get him somewhere was to get a towel underneath of him and have Anth and I stand on either side of him holding his back end up. When we got him outside it was the  saddest thing because he went directly outside where he used to go to the bathroom and peed and looked up at us, like he was saying "I really don't mean to pee inside!" Needless to say we both lost it at that point. We sat him at the edge of our deck and enjoyed the weather. We waited while Anth's mom came to watch the baby and for my mom to bring the baby back to say goodbye to Triggs one last time. After we got the car all ready for him, we packed one last slice of pizza for him and we were on our way. I felt awful because I know how much he hated car rides, but he was rather quiet and was happy to have my mom and me pet him the entire way. He did have a major accident in the car which took a good while to clean up, but the staff at the vet were wonderful. They had laid a big blanket down for him and I had brought his favorite memory foam pillow. We gave him his final slice of pizza and then guided him inside, where he immediately laid down. I think it was a lot of weight for him to carry on his front paws (being that he was well over 135 pounds). 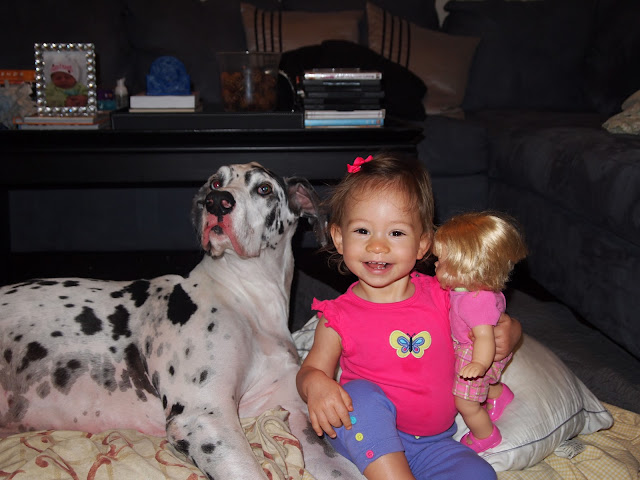 Just for a little random info, Trigger was protective. Not like cute protective, but he will literally rip you to shreds if you mess with me or Quinny (sorry Anth). I was always the one to take him to the vet, and I would have to walk in, make sure there were no other dogs, have the vet tech come out, throw the leash at her and off he would go. If someone else had his leash he was an angel. He just did not want anyone around his girls. This is also the reason that in all of Quinn's existence we went on one family walk together. Love that boy. 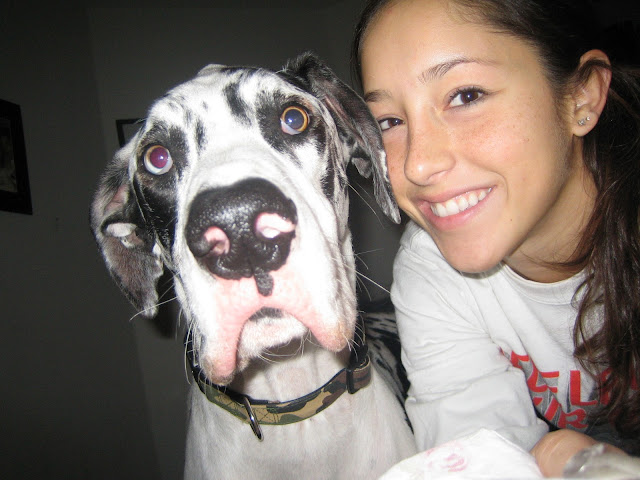 Probably 5 or so years ago.

Anyway, he was a little iffy when the doctor came in, but he was ok. I was holding him and Anth and my mom were right there with him. She explained the whole process and how she would give him a sedative that would make him drowsy and that it would probably take 15-20 minutes to kick in. We spent that time cuddling and rubbing him, remembering our favorite stories about him and of course I smothered him with a million kisses. He made us all laugh when the doctor peaked through the window and saw that he was practically asleep. She opened the door and he jumped up and growled. A protector to the very end. 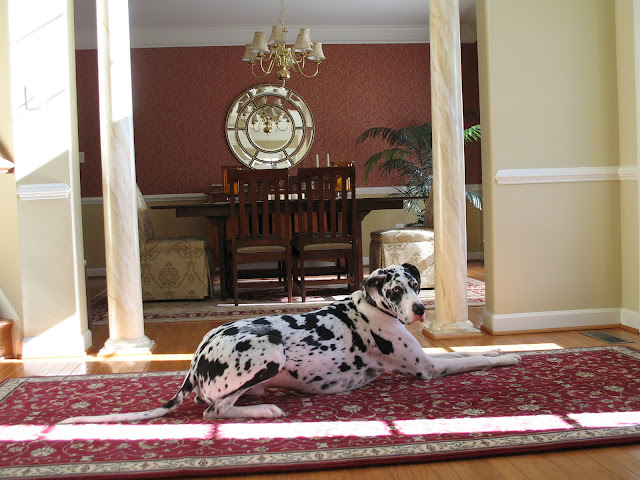 Loved laying in the sun at my mom's house.

Half an hour later, he was gone. It was so peaceful, I don't think they could have done a better job. I was hugging him the entire time, telling him what a good boy he was. I didn't want to let him go. 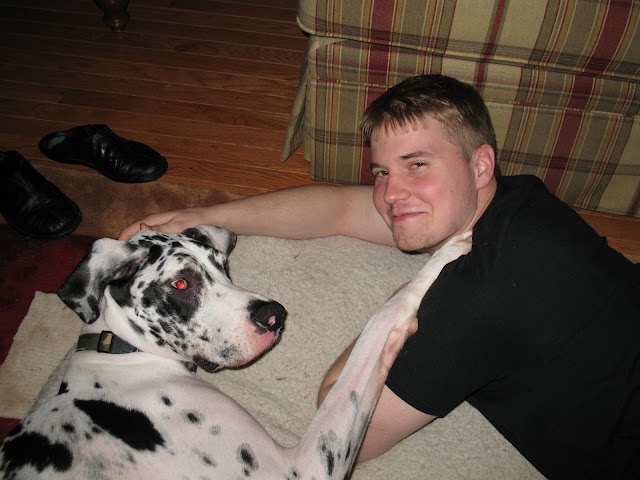 Always wanted his daddy to pet him! My two handsome guys. 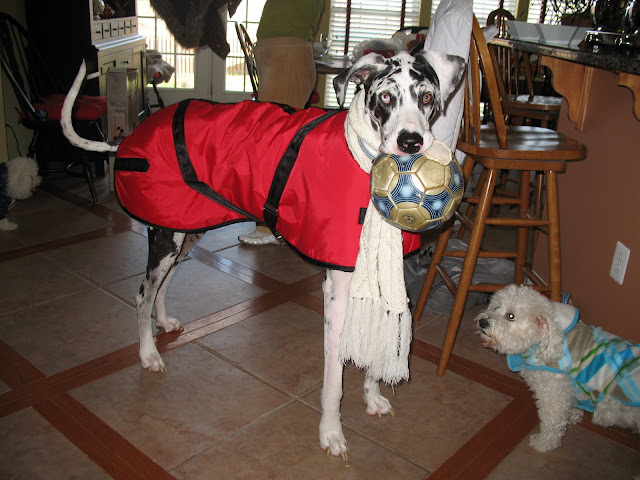 All ready for the snow...in his $130 jacket. Don't judge, it's very hard to find clothes for a dog that big!

Trigger was the most amazing dog. He was literally a person in a dog's body. I was his favorite person in the entire world and he was my first baby. Anth and I got him when he was 3 months old and 30 pounds. We thought he was a dalmatian in the pet store at the mall and paid no attention to the person who said, "That's not a dalmatian, that's a great dane." It didn't matter, I knew he was ours. I will never forget how funny it looked when Anthony carried all 30 pounds of him through the entire mall and into our car. That dog changed all of us. He taught me what it actually means to have to take care of something. How to be patient. All in all, he really did prepare me for Quinny. We are those people who treat animals like humans. He never had a dog bed because he slept with me until we got married. Once we figured out that we couldn't fit all of us in a king sized bed, he got his own room with a queen sized Sleep Number bed. We did everything you are not supposed to do. He had awful manners and was so tall that he would plop his head down on the dinner table and wait for a snack. He sat on people when they were on his couch. He was amazing and I will miss him as long as I can remember him. 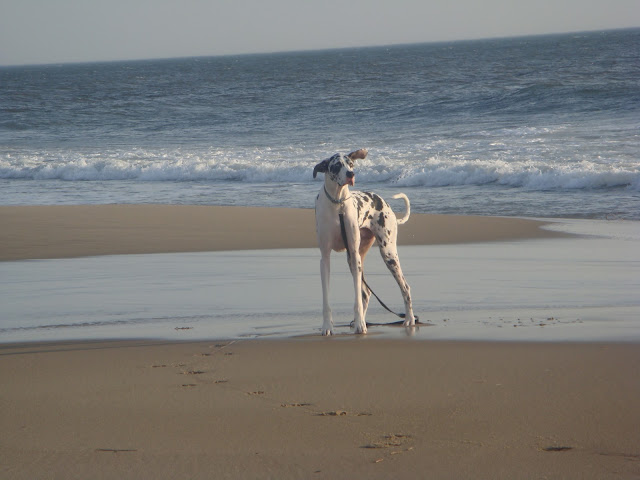 My all time favorite. 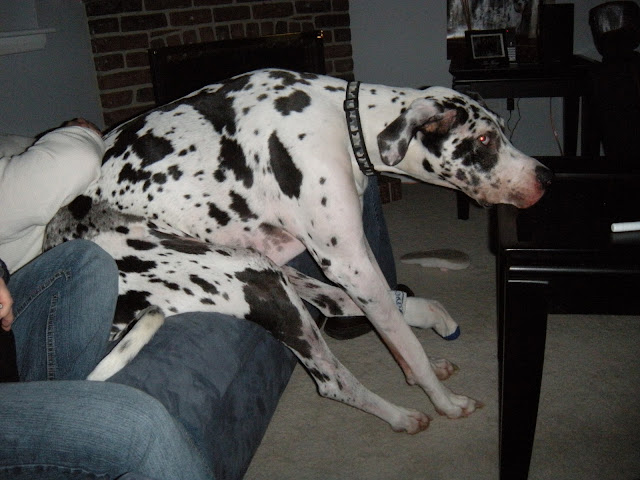 Butt on couch, face on table. 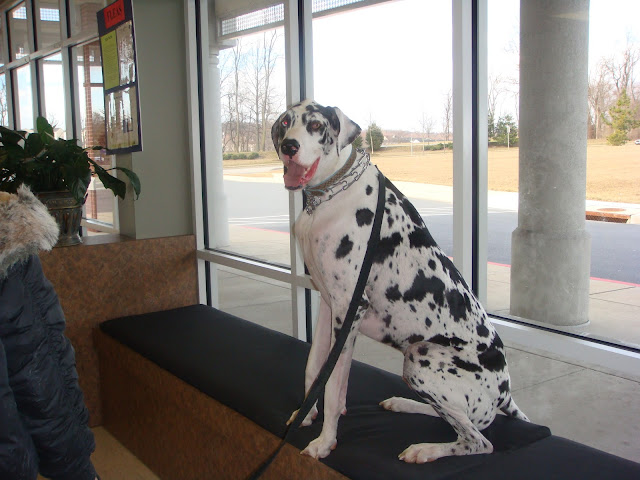 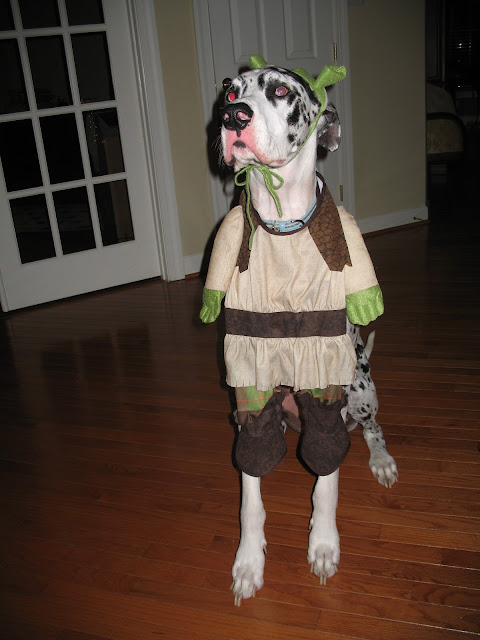 Happy Halloween! A little small, but still the cutest Shrek I've ever seen! 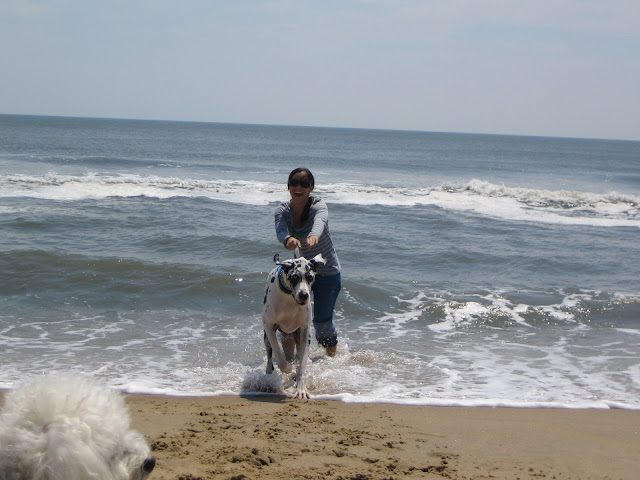 Trying my hardest to get that boy in the water! 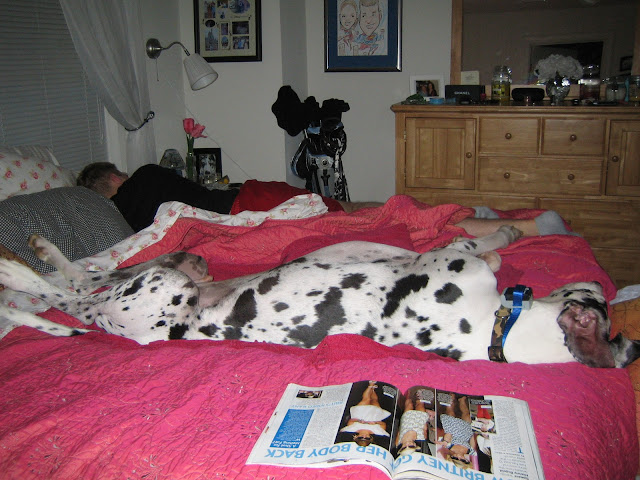 This was the life. 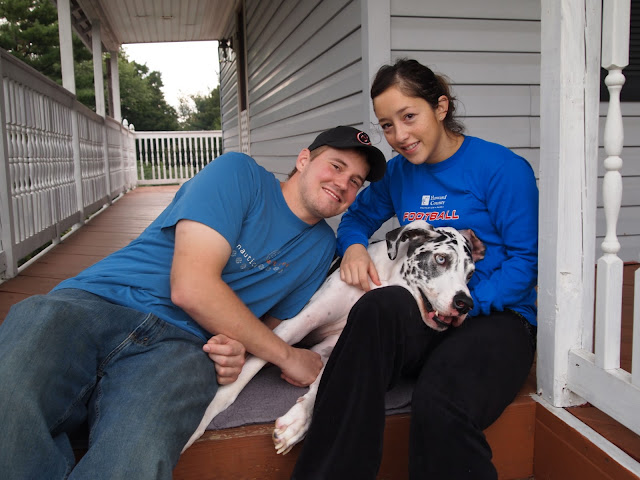 Last day. And happy to be outside. 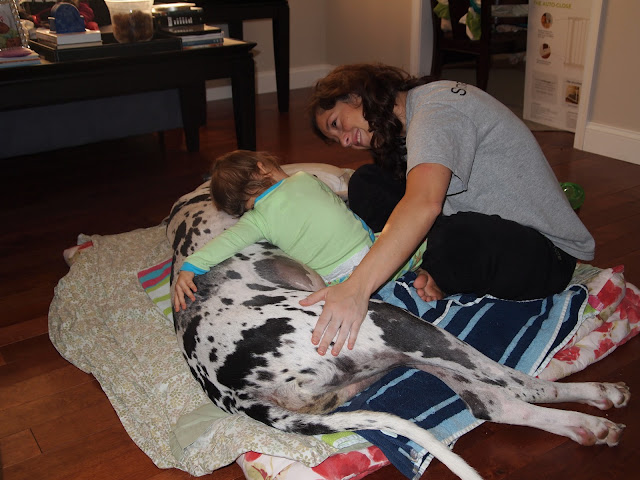 Giving cuddles to her poor brother. 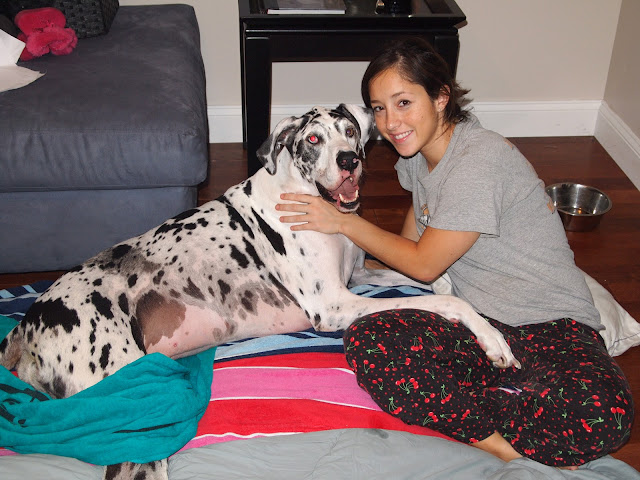 That dog loved more than any human I've ever met. 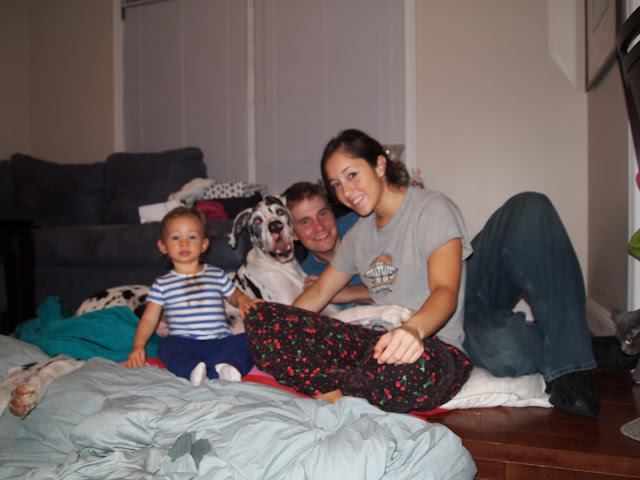 One of our last family pictures.

We got his ashes back yesterday. With a beautiful paw print that Anth requested. I like to think he will always be at home, looking out for his family.