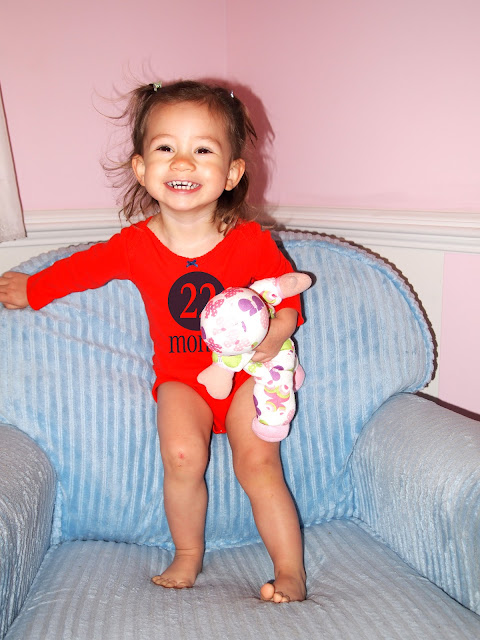 It was impossible to get her to sit down. As you can tell from that devilish little grin!

I love this picture because it is so Quinn. Scraped knees, addicted to baby dolls and bubbly. She is a riot and hilarious. Time outs are getting harder and harder because she makes us laugh almost every time. We are pretty good about not letting her see it, but Oh.My.Goodness. How can something so small be so manipulative?

I think we might be hitting tantrum city lately. God forbid I give her the wrong sippy or an animal cracker that isn't an elephant. The good thing is that she is pretty easy to snap out of when she does get into her little moods. She has the most hilarious fake cry I have ever seen though and I have been trying to get it on video but she knows to stop as soon as I whip it out.

She is a cuddly little love bug (mostly with her father) but I love it. They have little snuggle sessions on the couch watching Mickey. I hate that she won't cuddle with me! This goes to show all of those people who tell you not to rock your kids to sleep? Crap. Because we used to do it every night until she started demanding to be put in her crib. I would give anything to still be able to do that!

Having an almost 2 year old is unreal. I honestly feel like I just gave birth yesterday. But at the same time I cant help but wonder what the hell we did with all that free time before we had her!

Happy 22 months baby girl! Your birthday is officially under full party planning swing and I cannot wait to see your little face in a few weeks when you get to see Mickey in person!

Labels: Little Bits of Happiness Months Quinn So cute I can't stand it