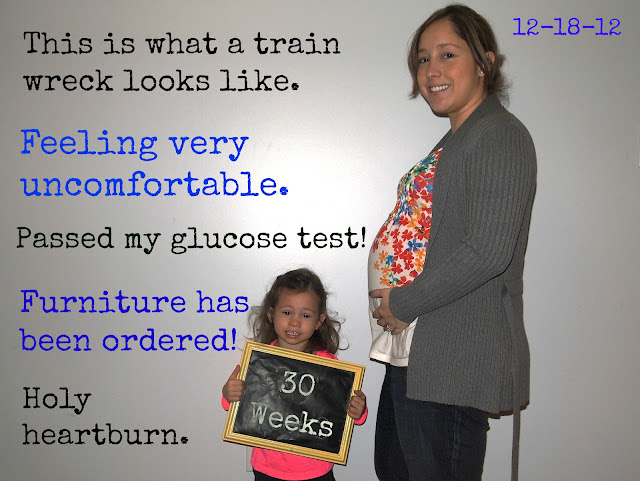 I would just like to preface this by saying this was right before both of our nap times. There were 673 mph winds and we had just finished running errands. (I got your back Quinn.) I just realized it had been way too long since a Bumpdate, so we went with it!

I was lucky that this shirt even covered my ever expanding stomach.

30 weeks. 30 WEEKS PEOPLE! I guess you can say this is starting to get real. Which is good because I have already reached that point of the "I am never getting pregnant again" phase. The main reason? I am out of shape like whoa. Second? HEARTBURN! I never, ever experienced heartburn with Quinn. And I am starting to think the whole old wives tale of heartburn and hair is pretty true. Being that at our 28 week ultrasound, the first words out of the tech's mouth were "WHOA! She's got some hair."

Being that Quinn looks like Daddy gave birth to her, I am starting to get a little worried about the fact that Harper may come out looking more like a Consuela than a Harper and that my Spanish roots are really going to show up in this one. (Which would be totally fine, as long as this little bambino is as healthy as her sister!)

Everything is moving along smoothly! I passed my glucose test, am measuring right on track and have kept my weight gain in the 20's so far. I think I had gained 30+ with Quinn at this point. Also? I blame any weight gain on the holidays and working at a place that makes it's first priority feeding pregnant women until they can't move.