A little bit about Harper Grace. 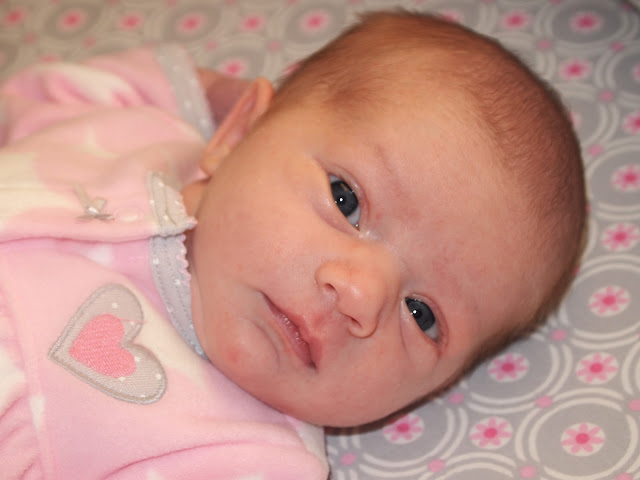 This baby. She is seriously such a little blessing. 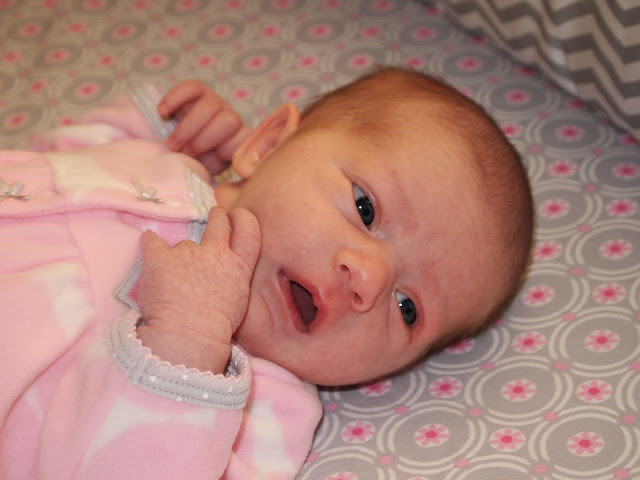 From the first day she came into this world she has been such a calm little baby. Only until recently has she realized that she can actually cry when she needs or wants something, but other than that?
An angel. 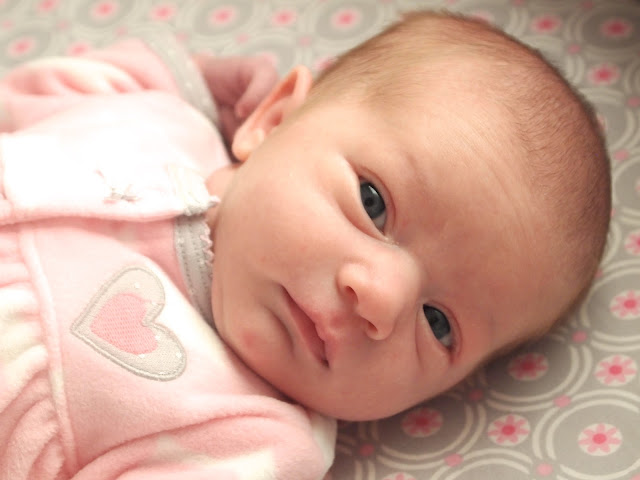 Quinn was a very difficult newborn. She slept on my chest for the first 2 months of her life, she had some gas problems that caused her to get fussy every night around 7. She was however, the happiest baby otherwise and Harper?
Seems to be following in her sister's footsteps. 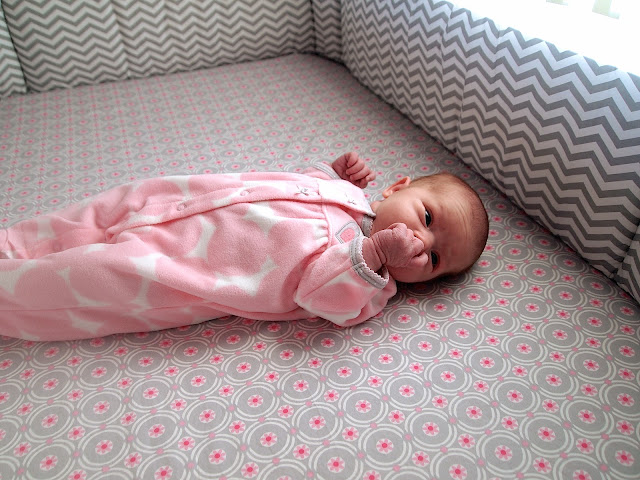 I don't know if it's normal or not, but this one has already fallen into a little bit of a schedule. Obviously, it's a very relaxed one being that she isn't even a month old yet, but we are slowly working it out. She goes down for the night everyday around 9:00 or 9:30. She wakes up at around 1:00 or 2:00 for a quick diaper change and feed, and then goes right back down until 4:00 or 5:00 for another quick feed and then is usually up for the day around 7:30 or 8:00. It's been pretty consistent like this for about a week.
Quinn was seriously up every 30 minutes to an hour wanting to eat like a little moo. Which is weird because she was always so skinny and Harper seems to be a little more chunky. Which I am loving. I am so not used to baby rolls! 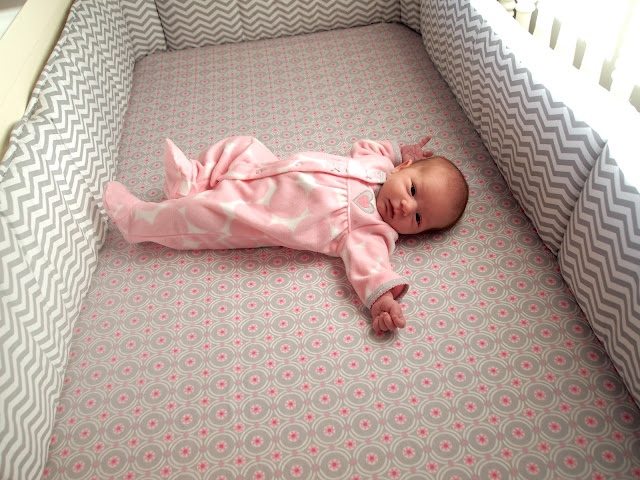 Breastfeeding is going GREAT. This little one has been a champ since day one and was even 5 ounces above her birth weight at her first doctor's appointment at 5 days old. (Just like her sister!) Her next appointment is on the 26th so I am excited to see how much this little nugget has grown.
She eats every 2-3 hours during the day and is pretty quick about it. 10 minutes tops and she's a happy little clam. (Which I am sure Quinn really appreciates!) 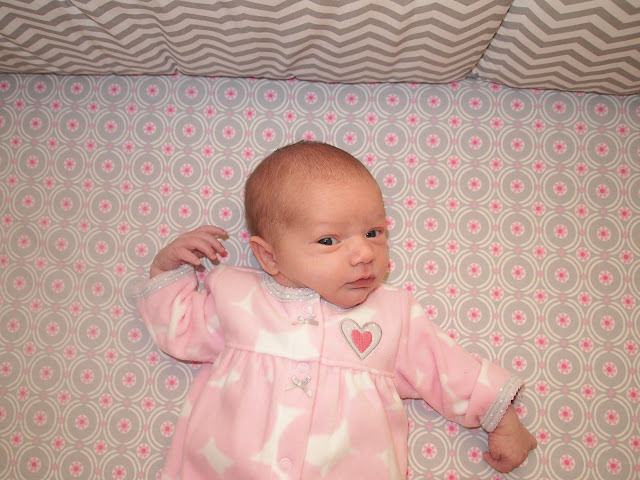 She has started smiling a little bit at us, which is heart melting. She seem so "big" to me. I don't know if it's because this is my second and I am much less of a wreck now, but she seems less fragile. 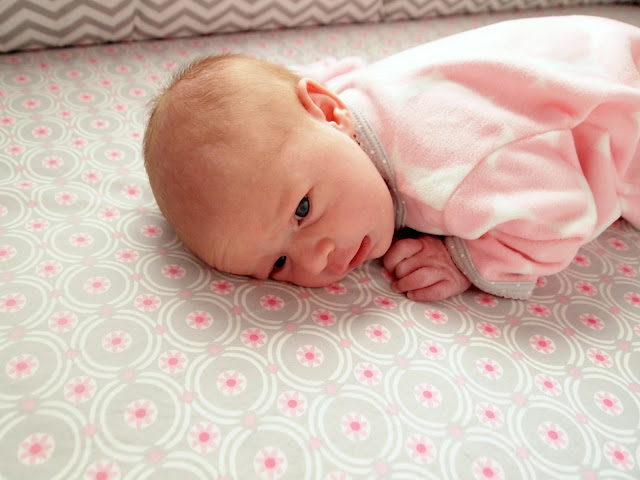 My littlest baby. I just can't get enough of those little cheeks and (BLUE!) eyes. She is much more fair skinned than her sister and much more blonde which just makes me laugh because I was so worried that this one was going to come out looking like George Lopez. I don't know why I thought that, but I definitely did. 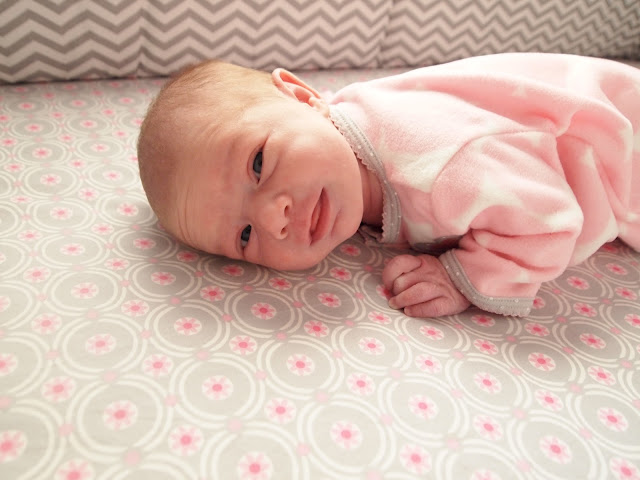 Mama loves you little bambino. Thank you for being so easy on me so far :)
Labels: bambino #2 Harper