Being that Quinn woke up on Halloween with a fever and I didn't get to shower that day... I will treat you to some horrible quality iPhone pictures of our Halloween. Thank GOD Quinn's fever went away by nap time and she was all better because she missed out on trick or treating last year because she was sick!

This Halloween was amazing. It was just awesome. We spent it with Aunt Tessa, Uncle Ryan, Aunt Jamie and Uncle Matt. We decided it would be a new tradition because it was just too much cute to be had.

We started off with obviously stuffing our faces full of pizza, fries and mozzarella sticks. (Does ayone else feel like just calling it a loss until January? I feel disgusting.) Aunt Tessa's neighborhood was perfect for the little kiddos to do all of their trick or treating and that they did.

I mean look at these kids. 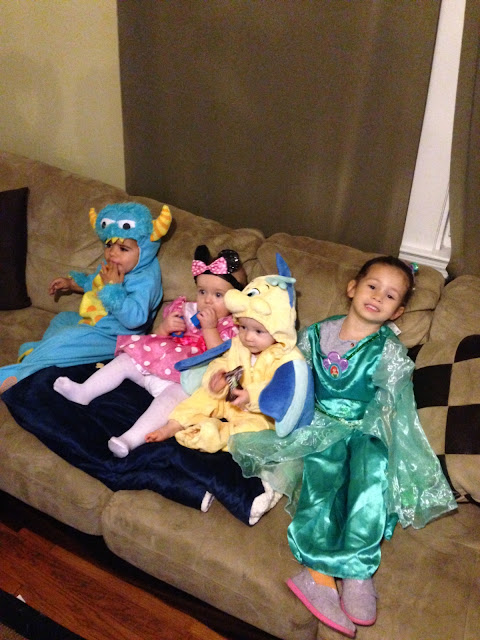 My little princess was SO excited. 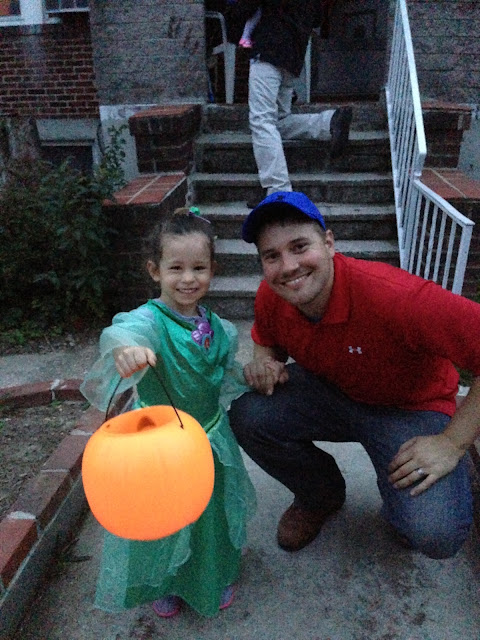 And just so darn proud of herself.

The kiddos had a great time. Harper happily (or not so happily toward the end) watched her big sister go up and down the rows of houses collecting all the candy that would soon be eaten by her mother. I love having all of the kiddos together and especially the boys because it doesn't happen nearly enough.

I hope everyone had a safe and fun Halloween! I also want to add that I cannot believe the assholes that were some kids that we encountered. No manners, cutting in front of lawns in front of poor little kids with backpacks collecting their candy dressed in jeans and a hoodie. Sorry for the rant, but asshole kids are kind of my pet peeve.

Tess at least when we trick or treated in high school we never cut in front of children and we actually put some effort into our costumes (Hawaiian Eskimos will forever be my most creative costume.)

Labels: Halloween Harper Quinn So cute I can't stand it