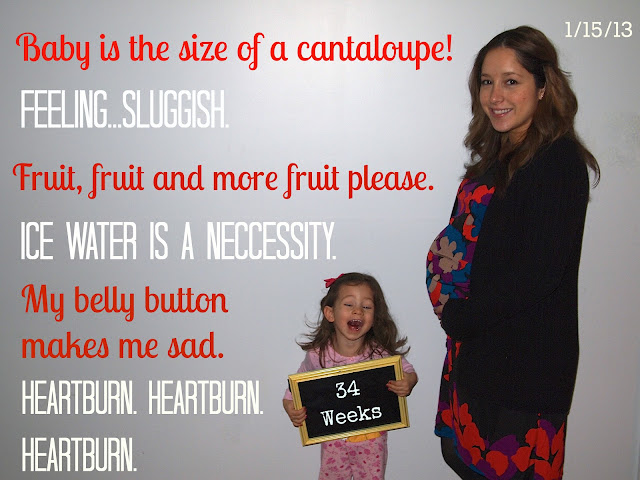 Well. There is really a baby in there. It still boggles my mind when people ask me how far along I am and I say 34 weeks. 34 WEEKS?! Did I not just get pregnant? aka was Nolan not just born?! Yes, whenever I want to remember how old he is, I just count how pregnant I am. I will forever have him to thank for our little Harper :)

I feel like a lot has changed since my last bumpdate! The weeks go by and I just get more tired and more wanting to not be pregnant anymore.

In other news? Guess who got rear ended last Friday with her 2.5 year old in the car?

I was dead stopped at a red light when this nut case of a woman SLAMS into us. Not like a "OMG I can't stop hitting you even though I am slamming on my brakes" but a "OMG is that a car in front of me and a red light that I didn't see? Oops I'm so stupid."

Seriously this woman must have been on crack. I immediately get out of the car and into the back seat where I see my little nugget is perfectly safe. Thank God she is still rear facing. All she kept saying was "Mommy what was that sound?!" After I make sure there isn't a scratch on her, I jump out of the car and right towards this woman who was already on the phone (who knows if she was when she hit us) and she doesn't say a word. She keeps talking on the phone, no apology nothing. Want to know the best part?

She got stretchered out in an ambulance.

Seriously if I ever see this woman in public again I will probably rip her face off. I could not believe the rage I felt at that moment. How awful would you feel if you rear ended someone and you saw a big fat pregnant woman waddle out of the car with her 2 year old? I would feel awful and the apologies would be never ending. So after a call to my doctor I ended up spending the afternoon in labor and delivery being monitored for a few hours. It was awful but Anth left work and met me there and I have the best friend in the entire world who came and brought me Chic Fil A. (I LOVE YOU!)

Thankfully, my car had literally 3 scratches on it, which SUCKED because we were actually car shopping that weekend. Fortunately the damage was so minimal we did end up trading it in and mama has a brand new ride for Quinny and Harper! I will have to do a separate post about my new favorite toy.

Only 6 more weeks! (At the most 7, because even though I am trying for a VBAC, they made me schedule a repeat c/s for March 5th.)