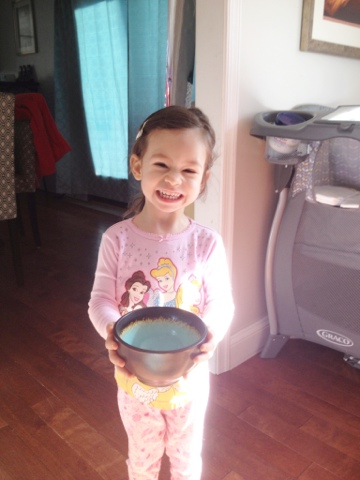 After Quinn's little medical scare, she made it home and slept for a good 13 hours in her crib. Girlfriend was exhausted.

If you noticed from a lot of the hospital pictures, her paci was in a lot of them. Before that, she had only used her paci for naps and bedtime. It was actually not allowed to leave her crib and she was well aware of that.

I was petrified at the thought of getting rid of the paci. Worse than potty training or any other milestone. I don't know why. Probably because it would interfere with the single thing I love the most in this world. Sleep.

I kid. But seriously.

Since we weren't about to tell her she couldn't have her paci in the hospital, we rolled with it and dealt with the judgy stares of people watching our almost 3 year old with a paci in her mouth.

We woke up on Tuesday and when I looked at her paci, I could not believe how disgusting it was. There was a good two holes in it (hello choking hazard!) and what appeared to be something that closely resembled poop on the inside of it. This was her last paci and we had made it very clear that we were definitely not buying anymore.

We had made a huge deal of the paci fairy before, so she was familiar and I did my best to gross her out with the poo in the paci concept. Which she happily agreed with.

So we put it in a bowl and put it outside for that damn fairy to come and get with promises of a trip to Toys R Us to pick out whatever she wanted.

We are so not against doing this by the way.

I am happy to say that it's been about a week of her sleeping without it, and while she has resorted to talking to herself way more before she falls asleep with the funniest of things to say, she has had no problems.

I don't know why I keep doubting this kid. I need to just accept the fact that I am the problem and I really shouldn't worry because she is just that awesome.

While most of me is glad we got it over with,  a big part of me is sad. Because that was her last "baby" thing. And I really wasn't in a rush to take it away from her. When I sit back and think that this little girl has only been in this world for nearly 3 years. Having a paci at 2 1/2? Not a huge deal.

Natasha wrote this post about it, and I could not agree with her more. JUDGE AWAY PEOPLES.
Labels: Milestones Quinn